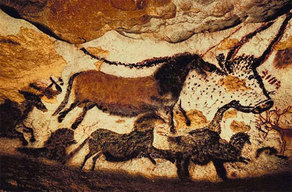 Art— paintings, sculptures, writing, music— has been a part of human expression since the first neanderthal made a marking on a cave wall. The innate desire to document history, personal or global, has been one of the greatest driving forces of the human race for thousands of years.
Every significant event in humanity has been met with or spurred by an artistic movement.  The Renaissances, Harlem or Italian, were responses to the shift in lifestyles of the people of the time.

With a wave of technological advancement rivaling the Enlightenment, art and ideas are more accessible than ever.  Take Banksy the world-renowned  graffiti artist, who shares his pieces of social commentary on the local walls of his city and the global screens of the internet.  He claims:
“Art should comfort the disturbed and disturb the comfortable.”


But where do we find art in democracy: At the beginning of a movement, acting as the catalyst, or simply commentary?

In 40 years, one of the bestsellers this year may forever be heralded as one of the greatest works of American writing, or a truly formative, telling novel of the times. The voice of a nation  is being spoken right now, and comes from every mouth of any citizen willing to speak.

Many argue mass-produced art is the downfall of beauty. Philosopher Noam Chomsky says “the media actively competes .....aggressively portray themselves as spokesman for free speech and the general community”(Manufacturing Consent). Many argue well-known artists have no place in political art, to this I argue: Music in the 70s opposed the Vietnam  war  was sung at protests and J. Cole’s praised “Be Free” in light of police brutality and murder in  Ferguson is a form of protest.

Science fiction author Ursula Le Guin argues her genre is a means of exercising  imagination “ we’ll be wanting the voices of writers who can see alternatives to how we live now.”

“Artists play a vital role, telling these stories and keeping history alive,”, Damien Davis,  creator of the “All Hands on Deck”. Frida Kahlo said “​"Pinto flores para que nunca mueran" I paint flowers so that they never die.  Art both preserves and creates new ideas. It can be pretty and mean something.

Art, well-accepted form of expression is changing everyday, yet the inspiration and altruism people use to create it remain the same. Blogger/novelist Cory Doctorow states in his neo-libertarian science fiction novel “Little Brother”, which is a mildly dystopian California directly after a terrorist attack, “ my whole life, waiting for freedom to be handed to me. Freedom is something you have to take for yourself.”

Everyone needs to to go out and create art. To express grievance, create awareness, or to say something, anyone, any American can be an artist. Regardless of whether art is proactive or reactive, one message is not lost in translation: I am here.